The Compatibility Tester is a location on the island in Tomodachi Collection and Tomodachi Life that the player can use to check two Miis likelihood to become friends or sweethearts.

Same gender Miis can check their friendship rating, while opposite gender Miis can check their romance rating. An adult and a child Mii or two related Miis will always have a friendship rating, regardless of gender. In the Japanese version of Life, there is no difference between child and adult and it would be viewed as a romance if they are of opposite gender.

A low compatibility rating does not necessarily mean the two Miis cannot have a relationship, this is only a horoscope meter and should not be taken too seriously. A Mii without a complete birthday cannot use the Compatibility Tester and will just display question marks on the forecaster, due to the fact ratings are based on birth dates.

A forecaster can also be used to check ratings for a week for work/study, chats, leisure, and love. All the possible results are:

It is called Love Rating in the European version.

If there are two or more sentences displayed in the description, the in-game description will only show one of them.

Note: Romance rating can only occur with two Miis with different genders and are in the same age group.

An attempt to diagnose a Mii without a birthday. 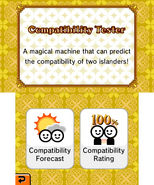 The screen shown if the player attempts to diagnose a Mii without a birthday. 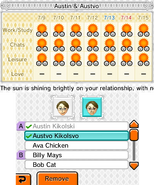 Diagnosing two Miis' romance
Add a photo to this gallery

Retrieved from "https://tomodachi.fandom.com/wiki/Compatibility_Tester?oldid=43843"
Community content is available under CC-BY-SA unless otherwise noted.