The concert hall is a location in Tomodachi Life. In this location, Miis can be made to sing songs, in a group or solo. When a Mii levels up, the player can give them a song as a level-up gift, which will unlock the song for them to sing. The player can also change the lyrics of the songs to anything they wish.

Miis are able to form groups of 2-7 members and perform songs together, as long as every Mii in the group has given the same songs. The order in which the Miis are added will determine what they do in the performance. Group positions can be changed by clicking the clothes icon on the top-left corner, and sliding it around. A maximum of 50 group songs can be created.

Song lyrics can be changed for both solo and group performances. Depending on whether it is a solo or group performance, and how many are participating, dances will vary. The following are the default lyrics for every song.

An example of a song with modified lyrics.

A group of Miis shocked when "Make it Stop!" is selected.

The background for the Metal song in the Japanese version includes several demonic faces. In the Western and Korean version, this was replaced with two flaming guitars.

The screen in the background displaying Mii's face if their name is mentioned in the lyrics. This only happens in the Japanese version. 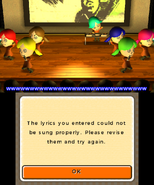 A pop-up message that appears if the lyrics are edited to be ridiculously long.
Deutsch Français
Community content is available under CC-BY-SA unless otherwise noted.
Advertisement