There are various events that occur in Tomodachi Collection, and Tomodachi Life during the course of the day. There are events in the morning, afternoon, and in the night based on the time set on the system. For the transcript of events, see this page.

"Islanders donate money here once a day. Cha-Ching!"
— Event Description, Tomodachi LifeDonations (募金 Bokin) take place at the fountain and this event only occurs once at any time of the day. It is unlocked by having a Mii ask about donating funds to the island.

At this event, every Mii living on the island will donate a bit of their money to the player. Donations are often considered the Tomodachi version of taxes as- all Miis participate and the money goes towards the island.

An oversight exists in Tomodachi Life where after a Mii walks off-screen, the player can see the back part of their hair or hat will stop moving and then the Mii will disappear.

"Write something in each field with your stylus. The islanders will vote for the one they like best!"
— Event Description, Tomodachi Life

Judgement Bay, known as Vote (多数決 Tasuuketsu) in Tomodachi Collection, is a 24/7 event that can be played an unlimited number of times per day at the Question Hall (TC) or the Beach (TL). Judgement Bay becomes available after the player has 16 islanders and has solved at least 40 problems.

The player has two sides to write in for Collection, and up to four sides in Life. The player must write something in the sand, and then the Miis will pick a choice by standing in one of the sections. Afterwards, the player has the choice to either leave or they can tap on the stick figures and a random Mii will pop up and say their catchphrase or something about their choice.

Six random islanders (three in Collection) will be standing together to answer questions from a seventh (fourth in Collection) islander, who will ask whatever questions the player enters for them. All questions should have yes or no answers, with three questions available each round. The questions available will be randomly shuffled every time after a question is answered. Each question will have blanks that the player can either fill in themselves or choose to autofill.

Once the player has chosen an answer the Miis will respond with a raised or lowered hand, indicating yes or no, respectively. In Life, Miis can raise their hands normally, excitedly, or shyly. They may also elicit reactions from other Miis in the group, who will stare at them in shock. Sometimes, all Miis will close their eyes in disagreement. The process repeats itself twice and the game ends. 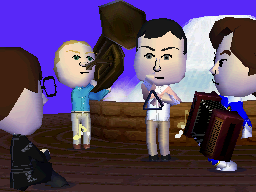 One to three random Miis will play various instruments while another Mii watches. When the music is done playing, the audience claps, and the player can clap by touching on the touch screen. After clapping, the Miis will play the music again.

The player does not earn anything from this event. 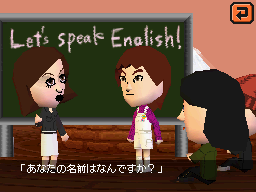 The Miis speak English in this event. One Mii asks the other Mii's name, then the other Mii says their full name. The event ends with the first Mii saying "Okay, very good!", the other replying "Thank you!", and two random Miis sitting down clapping.

"Chat session in progress! Some [guys/gals] are hanging out and gabbing about who knows what..."
— Event Description, Tomodachi Life

A Chat Session (少年/女の子の夜 Shonen'/'On'nanoko no yoru) is an event held in the café at any random hour in the day, excluding night. The event is unlocked by having a Mii confess for the first time. It is also known as Guys'/Girls' Hangout (US) or Guys'/Girls' Meeting (EU).

In the session, two to four Miis who are friends with each other will gather and use several pre-written dialogues to converse with the other Miis.

Each question starts with a random Mii in the group, who thinks before turning to the others and says the first line of dialogue, followed by the second, third, and fourth dialogues being said by the other Miis. If fewer than four Miis are present, some lines are cut from the conversation. Sometimes, even if four Miis are present, lines are either cut or replaced by an ellipsis. Once the dialogue routine ends, another random Mii will proceed to think up and start another conversation, repeating the sequence from the beginning. The sequence continues endlessly until the player leaves. The UK/AU version feature different dialogues.

There is also an event similar to this called a Pity Party, which occurs if a Mii is sad and hasn't been cheered up for a long enough period of time.

"Pity Party under way! Someone must need a little cheering up..."
— Description, Tomodachi Life

A Pity Party (ピアスパーティー Piasu Pati) is an event that takes place in the cafe. It can occur at any random hour when a Mii is left sad for a period of time.

Going to the café while a Pity Party is being hosted will show up to three Miis (usually friends of the sad Mii) telling several mishaps and jokes trying to cheer up the main Mii while the main Mii just sits sulking, not saying anything. Unlike a regular Chat Session, the gender of the Miis participating are not fixed; the Miis that appear can be of either gender. The only exception is the main Mii, who always sits in the top left and cannot be changed.

Like the Guys'/Girls' Hangout, one Mii starts a conversation with a joke or mistake. Then up to two other Miis happily follow up with the statement. After each conversation, the three Miis stare silently at the depressed Mii, who does not say anything, before the next conversation begins. All conversations have four lines total, but since the depressed Mii will always stay silent, only up to three lines are said each time. This continues on an endless loop, until the player exits the café.

The Pity Party will automatically end when a Mii's sadness bar drops down to zero or if an hour passes since the event's start.

Flying Disc (フライングディスク) is an event held at the park between 8:00 AM to 9:00 AM. It is unlocked by having a Mii confess their love for the first time.

Before throwing, a Mii will say a sentence, such as, "Here it comes!" When they do throw, then that Mii will say something like, "Don't drop it!" Occasionally, a Mii will perform a "special throw" where they make a stance, say a line in an emotionless tone, spin around, and make the special throw while calling out the throw's name in an echoing, high-pitched voice.

If the frisbee hasn't been thrown to them in a while, a Mii will start pointing at themself with an angry expression until someone (Mii or player) throws the frisbee to them. If the Mii didn't have to move when catching the player's throw, he or she will comment on how good the throw was. If the player takes too long before throwing the frisbee, a Mii will become impatient and tell the player to hurry up.

"Time for a magic show! Please lend a hand (or two) to this world-class magician."
— Event Description, Tomodachi Life

Magic Show (マジックショー) is an event that takes place at the Amusement Park in the morning from 10:00 AM to 11:00 AM. It is unlocked by having a Mii confess his/her love for the first time.

During the show, a magician will ask the player to help out with a magic trick. The game will use the Nintendo 3DS' camera and the player must move his/her hands towards the top screen of 3DS to send own "magic energy" so the magic trick can commence. The magic tricks that can be played are variations of the "sawing a woman in half" magic trick.

"Bust out the burgers and buns -- there's a barbecue going down!"
— Building description, Tomodachi Life

The BBQ (BBQ lit in the EU version) is an event that occurs in the park from 2:30 PM to 3:30 PM. It is unlocked by having a Mii confess their love for the first time.

When the BBQ is happening the player can tap on the park and enter it. Some of the player's islanders will be standing around a grill, the center left holding a pair of tongs, the other three eating meat, either some steak or shish kabobs. During this, they will talk to each other about random things, as usual, and smoke will increase on the grill. When the smoke increases, the player is told to blow into the mic, and when the player does so, the smoke will clear. If the player does not clear the smoke, the Miis will turn darker each time until they are completely black.

The Photo Shoot (カメラマン Kameraman) is an event in the park that takes place from 4:00 PM to 5:00 PM. It is unlocked by having a Mii confess their love for the first time.

"Word chain tournament in progress! A fierce word chain battle is underway, but who will win?"
— Event Description, Tomodachi Life

Word Chain (しりとり大会 Shiritori Taikai) is an event in the European and Japanese versions of Tomodachi Life. Word Chain takes place at the fountain from 5:30 PM to 6:30 PM in the European version and 6:00 PM to 7:00 PM in the Japanese version. It is unlocked by having a Mii ask about donating funds to the island. It does not appear in the North American version, having replaced by Rap Battle.

A category will be chosen at the beginning of the game, such as general word association or food association. Two Miis will then come up with words that begin with the letter that the previous word ended with. An example word chain would be: Tortilla → Apple → Escargot → Tea, Or Scourer → R.O.B. → Basket ball. If either Mii repeats a word that has already been said, they will automatically lose.

A Rap Battle is an event that takes place at the fountain from 6:00 PM to 7:00 PM in the US version and 7:00 PM to 8:00 PM in the European version. It is unlocked by having a Mii ask about donating funds to the island.

In the battle, two Miis try to insult each other in rhymes until one of them cannot come up with a rhyme. When a Mii loses, they will be embarrassed and confused. A rap battle's length is random, where some can go on for verses and some end after a few lines. The rapping Miis can be supported by two other Miis, who cheer when a winning rap is heard.

Four Miis will participate in an 8-bit adventure game, fighting various food items and treasures. In order to win, the player must guide their four Miis up to the boss battle and win without all of the Miis dying in the process. This game is played in a traditional RPG style. Tomodachi Quest can only be played once a day, for $0.25 or £1.

The screen shown after donations are finished.

Street Live at night.
Add a photo to this gallery

A battle taking place in Tomodachi Quest, using a scented candle as an enemy.

All of the Miis being dead in Tomodachi Quest, resulting in a game over.