Hidden Locations are certain locations that only appear in special events, such as a proposal. Otherwise, the said locations are completely inaccessible. The idea implies that the island's map screen may just be a simple view and the island is actually much larger than possibly known. 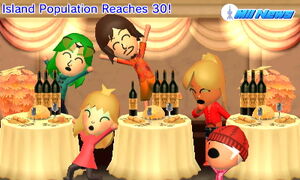 The Bathouse appears whenever a Mii uses a bath set. It also appears as a common interior.

The Bathouse in Tomodachi Collection.

The Bathouse as an interior in Tomodachi Life (NA/EU)

The Bathouse in Tomodachi Life. (NA/EU)

The Classroom, as the name implies, is a simple room found within a school building. In the American version, the room resembles an average American classroom: Desks lined up in front of a chalkboard with a computer and bookshelf behind them. In the Japanese version, it reuses its appearance from Tomodachi Collection: featuring cupboards and portraits in place of the desks and bookshelfs. The wallpaper is also different.

The classroom appears common Interior, but its more common appearance is as a location option for a confessing Mii. It is also a Photo Studio background.

The Classroom as an interor (NA/EU).

A Mii making a confession to another Mii in the classroom.

Two Miis in the classroom shocked after the player decides against them becoming sweethearts.

Japanese Classroom
Add a photo to this gallery

The Hotel is a hidden Location only appearing in Tomodachi Collection. It serves the same purpose as the Appartment Lobby in this game, being where Miis celebrate when their population reaches a certain number.

The Hotel appearing durring a Newscast.
Add a photo to this gallery

The Kitchen is an area where Miis cook using a frying pan. It also appears as an interior.

The Kitchen as an Interior in Tomodachi Collection.

The Kitchen as an Interior in Tomodachi Life.

A mii using the Kitchen in Tomodachi Collection.

A Mii using the Kitchen in Tomodachi Life.
Add a photo to this gallery

The office appears in the Age-o-matic montage along with the restaurant and the train station. It's also a common interior.

The Office as an interior in Tomodachi Life.

The Office in the Age o Matic monotage.
Add a photo to this gallery

The restaurant appears as both a place where a Mii can propose and a location shown in the Age-o-matic montage, along with the office and the train station. It may be part of the Observation Tower, in the area surrounded with glass. The Restaurant is also the monthly interior for February, though it appears much more compressed.

The Resturaurant as an Interior.

The train station is briefly shown in the first part of the Age-o-matic with the Mii walking along the platform, and catching a train. It is also shown when one Mii tries to propose to his/her Sweetheart, and one Mii trying to set up a friend with a potential romantic suitor. The train station can also be mentioned in passing durring a Guys'/Gals' Hangout

Proposal train station.
Add a photo to this gallery

The Wedding area appears durring a Marriage between two miis. It also appears as the monthly interior for June.

Two Miis getting married in the Wedding area.

A group of miis attending the wedding.

The Wedding area as an Interior
Add a photo to this gallery
Retrieved from "https://tomodachi.fandom.com/wiki/Hidden_Locations?oldid=25574"
Community content is available under CC-BY-SA unless otherwise noted.