"This shop specializes in imported items from near and far."
— Building description, Tomodachi Life

Import Wear is a location in Tomodachi Life. The player can purchase clothing received through StreetPass and SpotPass. However, note that Import Wear is the only place to buy the exporting clothes from the player's or other player's islands.

There are a total of 24 SpotPass items, each given out on one half of a month over SpotPass. When given out initially, only a few colors will be available (and in a rare case unique to SpotPass items, missing colors are not shown as dotted lines in the shop). When that item gets featured again the following year, all the remaining colors of that outfit will be added, requiring two full years of playing Tomodachi Life (from the time of its release date) to unlock all of these outfits and their respective colors.

The roster of SpotPass items differs from region to region, with some items that would be treated as normal clothing that could be bought from the Clothing Shop or Hats Shop in one region would become SpotPass--exclusive in another.

Import Wear clothes have stopped being added as of May 16, 2016 in the US version. In the UK version, the clothes continued to release until the second half of May 2017. As of 2018, DLC for all regions have been discontinued. Only the Schoolgirl Uniform is available.

Clothing intended for male Miis. There are 7 items in total.

Clothing intended for female Miis. There are 21 items in total.

These are items that can typically be worn by either Male or Female Miis. There are 7 items in total.

These items are for Miis who wish to dress in a professional style. There are 0 StreetPass items and 5 SpotPass items for this category.

Costumes are for Miis who wish to dress up. There are 5 total items and currently 2 SpotPass items.

Hats is the category where a normal type of hat would be categorized as. There are 7 items and currently 2 SpotPass items.

These hats are more outlandish and fun, similar to the Costume Clothing. There are 2 items.

These are accessories that would not classify as a "hat", such as flowers and barrettes. There are 4 items. 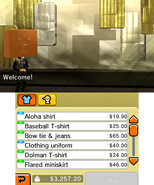 The Import Wear Shop during Christmas.

The Import Wear shop on Super Bowl (US).

The Import Wear shop on Valentine's Day.
Add a photo to this gallery
Retrieved from "https://tomodachi.fandom.com/wiki/Import_Wear?oldid=38733"
Community content is available under CC-BY-SA unless otherwise noted.