The island is the main location in Tomodachi Collection and Tomodachi Life. In Collection there is only one main island, but in Life there is an additional small side island to the right of the mainland to accommodate the new locations added.

The player can name their island upon starting the game, but can rename it later in Tomodachi Life. Said island is entirely inhabited by Miis that the player is supposed to take care of. These Miis can be put in the game through transferring them from a Wii in Tomodachi Collection, making them from scratch in both games (through Mii Maker), or using ones made on a Nintendo 3DS system and scanning QR codes in Tomodachi Life. In Tomodachi Life, the overworld map's soundtrack changes to a Christmas-esque version of the theme for December, for all times of the day (except for the Japanese version which start on the 24th and ends on the 26th). 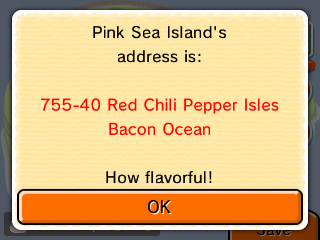 The island address is a feature exclusive to Tomodachi Life. Its purpose is to make the island unique and recognizable, so as to distinguish it from other islands found in StreetPass.

The island address consists of the island name, a 5 or 6 digit number code, an isle name, and an ocean name. Everything is randomly generated besides the island name. Isle and Ocean names will always use the name of a food item.

The Quality of Life is a number given to the island in Tomodachi Life used to generally describe how many luxuries it has to offer the Miis. It is unlocked at the same time as the Island Ranking on the Rankings Board, and is used to order the islands on that ranking. It has no actual effect on gameplay and it is currently unclear what raises and lowers the Quality of Life on an island although the Mii News on the Quality of Life suggests it raises by the total happiness levels of Miis.

At the beginning of the game, only the apartment building is available. However, as time progresses, more buildings eventually appear.

The island during the day.

The island in the afternoon.

The island at night.
Add a photo to this gallery

The island during the morning/afternoon.

The island during the evening.

The island during the night.

The island in the Japanese version.
Add a photo to this gallery

The Island at Noon - Tomodachi Collection
The Island During Daytime

Tomodachi Life OST 'Map (Night)'
The Island During Nighttime.
Add a photo to this gallery
Retrieved from "https://tomodachi.fandom.com/wiki/Island?oldid=43654"
Community content is available under CC-BY-SA unless otherwise noted.