This page is a candidate for deletion.

If you disagree with its deletion, please explain why at Category talk:Candidates for deletion or improve the page and remove the {{delete}} tag.

Remember to check what links here and the page history before deleting. 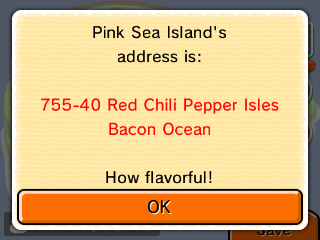 The Island Address is a feature in Tomodachi Life. It is randomly generated (other than the island name), and its purpose is to give the Island a unique and recognizable name, as two islands can be given the same island name. Travelers received though StreetPass will state the name of their original Island. Clothes and hats received through StreetPass and/or SpotPass will display the name of the Island they came from (usually Nintendo Island in Spotpass) and will be able for purchase in Import Wear.

Retrieved from "https://tomodachi.fandom.com/wiki/Island_Address?oldid=30238"
Community content is available under CC-BY-SA unless otherwise noted.