Sometimes, when currently interacting with a Mii after a Mii is given something, they might say to the player, "Since you're already here, let's play a game!", and they will be prompted to play a mini-game similar to the green problem icon.

Pixel Quiz: The player is presented three consecutive images (with reducing resolution as the player answers correctly) and must identify what they are. These also might be the same sprites the game uses for Tomodachi Quest.

Match: A memory-based mini-game where the player has to match panels on a 3x4 board. The items displayed on the panels could be a Mii's face, any food, or any treasure.

A player winning a mini-game.

The Times Up screen during the Daruma Doll game.
Add a photo to this gallery

Receiving a box of tissues from a Mii. 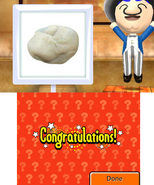 A player gets a draw in VS Match.

The Mii Shadow quiz in the Japanese version. Notice the arms of the shadow Mii.

Losing hearts left to right in the Japanese version for the Match mini-game.
Add a photo to this gallery