Level-Up gifts are items found in Tomodachi Collection and Tomodachi Life. These gifts are different from the normal gifts that can be given to a Mii at any point. These are only obtained by a Mii leveling up.

These gifts are for the Mii's use in their apartments. In Collection, a Mii can own every gift in the game, as there are exactly eight gifts. In Life, only 8 items may be owned by one Mii. If the player tries to give another, they will have to exchange a gift they already own for the new gift. Multiple Miis can interact with a Mii's gift, and can also join in should they have it too.

Gifts in Collection will be colored the same as the Mii's set favorite color.

Unlike in Collection, the gifts are not colored with their Mii's favorite color.

The Western releases of Life include 3 exclusive level-up items - the kite, metal detector and skateboard.

A Mii using a Soccer Ball.

Miis using the Wii U.

One Mii playing his guitar

Two Miis in their laptops.

A Mii using a study kit. 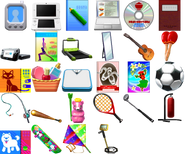 All of the gifts.

One Mii playing on the Wii U while the other Miis watch.

Two Miis with a cat.

A Mii with maracas.

A Mii wearing makeup and painting her nails.

A Mii admires her manicure.

Four Miis dancing to music on a radio.

A Mii talking on the phone.

Three Miis on a fishing trip.

One Mii with a kite.

A Mii riding a skateboard.

A Mii playing with a puppy.

1 friend reels in a fish while the other one watches.

1 friend gets his Gamepad out.

A Mii putting on makeup.

A Mii catches a crab.
Add a photo to this gallery

Retrieved from "https://tomodachi.fandom.com/wiki/Level-Up_Gifts?oldid=24954"
Community content is available under CC-BY-SA unless otherwise noted.