Marriages occur after a certain amount of time (anywhere between months and just under a couple of hours) has passed and both Miis maintain a good relationship with each other. One of the two dating Miis will have a problem icon and say that they want to get married to their sweetheart.

It is possible to have multiple marriages within 24 hours, but that is quite rare to have marriages that short time apart.

In the Mii's apartment the player will hear intense violin music in the background, accompanied by a slow heartbeat. Upon tapping the Mii's thought bubble, the Mii will tell the player they want to propose, and the player can choose to help out. Unlike confessions, the player cannot tell the Mii to wait, and has to help them out immediately.

When the player agrees, the Mii will first ask where to propose to the sweetheart, which can be at either at a fireworks show, the train station, the amusement park, or a fancy restaurant. Then the Mii will ask if they should change clothes. Finally, the Mii will say they're really nervous at proposing at the right moment and request that the player should help them propose to the sweetheart by telling them when their sweetheart is thinking about him or her. After the player agrees, the Mii says it's time and they're going to propose.

In Tomodachi Life there will be a mini-game where the player must help the Mii propose. In Tomodachi Collection all of this will be skipped, as right when the player enters the apartment the Miis will announce that they're getting married. In Collection the screen will then skip to their honeymoon.

The Mii and the sweetheart will settle in the player's chosen location. This transitions into a mini-game where the player must help the Mii propose at the right time by signalling that the sweetheart is thinking of them. The game lasts four rounds, and the player has three chances to propose, represented by three small hearts floating between the couple.

As a slow heartbeat is heard, a thought bubble will rapidly appear and disappear over the sweetheart as various pictures cycle through, showing the various thoughts going through the Mii's mind. When the proposer's face appears in the sweetheart's thought bubble, the player must quickly tap on the "NOW!" heart button to let the proposer know that it's time to talk.

Upon failure, one heart will break. If the player loses all three hearts, the sweetheart will ask to leave and the proposal will fail. The Mii can ask to try again in the future, but sometimes the other Mii will ask instead. They will not gain sadness upon a failed proposal.

When the player succeeds three times and the hearts are full-grown, the heartbeat in the background speeds up, and the player must tap the heart button at the right moment one more time to finish proposing. If done so, the Mii will propose to the sweetheart, and the sweetheart will happily accept. Then, as celebratory romantic music plays, the Mii who had proposed will cheer while any other Miis around will applaud. The player can applaud by tapping the touch screen until the view fades to white.

Following a successful proposal, the Mii and their sweetheart will give the player a gift and proceed to get married. If the couple are kids, the gift will always be an Age-o-matic, and the player will be asked to use it on the couple before the marriage can take place. The player can choose to age them up, but if their request is denied the wedding will be called off.

After the engaged Mii couple gives the player a present, the wedding scene is shown. A bell is shown ringing as white birds fly past, and the camera shows the newlyweds; the groom wearing a tuxedo, the bride wearing a wedding dress and holding a bouquet of flowers, as a cake stands between them. They walk up to each other then face forward happily as we hear applause. Their guests are then shown, who are randomly chosen friends, parents or siblings. The men wear suits while the women wear either frilly dresses, loose-fitted dresses, bubble dresses, evening gowns, or gothic dresses. Then, in an overhead view, the bride tosses her bouquet over her shoulder as the view becomes a gold-tinted photograph.

After the marriage, they will spend their honeymoon in a random country, bring back a souvenir, and settle in a newly constructed house. The married Miis can switch between living in their house or in their own apartments.

A married couple can have a baby with the player's permission. Marriage is not guaranteed to be forever and divorce is possible.

A total of four locations can be chosen, each with different interactions:

The honeymoon.
Add a photo to this gallery

Restaurant proposal. An example of poor timing, showing the sweetheart talking about another topic. 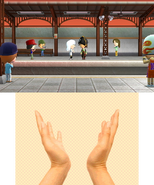 The kid Miis changing clothes before the wedding.

Various friends of both Miis, attending the wedding.

A honeymoon taking place after the wedding.

Example of a successful proposal in the Japanese version.
Add a photo to this gallery

Tomodachi Life OST Before Proposal
The music before the proposal.
Add a photo to this gallery
Retrieved from "https://tomodachi.fandom.com/wiki/Marriage?oldid=38822"
Community content is available under CC-BY-SA unless otherwise noted.