A personality is a mechanic featured in the Tomodachi series that is used to determine how a Mii behaves in the game. The personality of a Mii is determined by a quiz taken in Mii Maker when the character is first created.

Personalities are first featured in Tomodachi Collection, featuring four categories: Calm, Cool, Fun, and Dry, with 4 sub-categories for each. Each personality plays a role in interaction with other Miis. The different personalities of each Mii will determine:

A Mii's idle and walking animation depends on what their personality is. For instance, Calm Miis will sway their arms in a straight motion, while Cool Miis will stand in a thinking pose. In addition, a Mii's starting interior and pose are affected by what personality they are.

Personalities are featured once again in Tomodachi Life, functioning the same way as its predecessor with little to no changes. The only major difference is all of the personalities are renamed in this game, such as Calm being renamed to Easygoing.

There are other things added to this game that are also determined by personality, such as the interior design and roof color of a married couple's house. Additionally, when a baby is born, the color of their clothes is determined on the personality they are given, as well as the color of the starting clothes gained after they grow up.

Note that the Japanese names are not official. 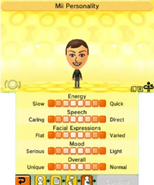 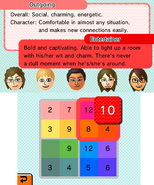 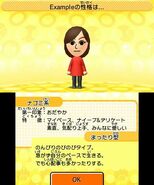 The pose the Miis make in the Japanese version; this applies to all personalities.
Community content is available under CC-BY-SA unless otherwise noted.
Advertisement