Tomodachi Collection (トモダチコレクション, Tomodachi Korekushon?, lit. “Friend Collection") is a life simulation game for the Nintendo DS released on June 18th, 2009, exclusively in Japan. It is the first game in the Tomodachi series. A sequel named Tomodachi Life was released in Japan on April 18th 2013, and in America and Europe on June 6th, 2014.

The game takes place on an island in the middle of the ocean, that can be populated with various Miis created from the built in Mii Maker, or transferred wirelessly from a Wii console. These Miis can be given a personal voice and personality based on the player's liking. Once each Mii is made, they will move into their own apartment on the island, allowing them to explore the island and its various facilities. As more Miis are added, more facilities and activities are unlocked, and the Miis may even become friends with one another, hanging out in their apartment or outside.

Miis themselves can also be interacted with in their apartment, allowing the player to give them food, clothes, or an interior for their apartment. Depending on how much they like it, the Mii's happiness will go up, and once it reaches a certain point, the Mii will level up, allowing the player to give them a level-up gift, such as a phrase or a song as a reward. If the Mii is asleep, the player may have a chance to view a dream, leading to a bizarre mini-game, event, or activity.

At certain times, events can be held that the player can witness, be it Street Live at the fountain, or Question at the Question Hall.

The game was developed by Nintendo's SPD group, being directed by Ryutaru Takahashi and produced by video game designer Yoshio Sakamoto, best known for his work in the Metroid franchise also made by Nintendo. The team was mostly made up of younger developers in a small environment. Early in development, the game was to be called "Fortune Telling Notebook for Teenaged Men" and would only feature 13-17 years characters. The game was later reworked to have more focus on life simulation, and thus Tomodachi Collection was made.[citation needed]

A Western localization was not made by Nintendo of America, due to the DS being unable to translate the voice synth into English. Despite this, fan translations exist .

In Japan, the game has received generally positive reviews. Famitsu gave the game a 29 out of 40. On the day of its release, the game sold over 102,000 units, making it the best-selling DS game in that period. On March 3rd, 2010, Nintendo announced the game had sold 3.2 million copies in total.

A male Mii wanting to confess.

Two Miis laughing amongst each other.

Two Miis in love with each other.

A Mii looking off to the side, with a thought bubble.

A Mii cooking with a frying pan.
Add a photo to this gallery

The player customizing a Mii's voice.

A view of the Personality Chart.

A nervous Mii, after the player stares at them long enough.

A shopkeeper tending to the Food Mart.

The inside of the Clothing Shop.

A Mii as a reporter in Mii News.

A Mii taking a bath.

A Mii hosting an English Lesson.

The Mii info screen
Add a photo to this gallery 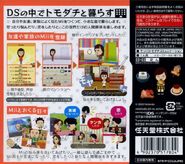 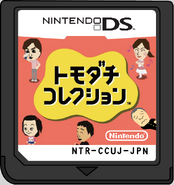 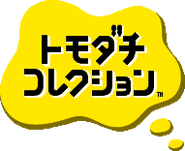 Home menu icon.
Add a photo to this gallery
Retrieved from "https://tomodachi.fandom.com/wiki/Tomodachi_Collection?oldid=39665"
Community content is available under CC-BY-SA unless otherwise noted.