This article is about the video game. For the Super Smash Bros. stage, see here.

Tomodachi Life, known in Japan as Tomodachi Collection: New Life (トモダチコレクション 新生活, Tomodachi Korekushon: Shin Seikatsu?), in America as Tomodachi Life, and South Korea as Friend Gathering Apartment (친구모아 아파트, Chingumoa apateu) is a life simulation handheld video game for the Nintendo 3DS and the direct sequel to the Japan-exclusive Nintendo DS title, Tomodachi Collection. It was first released in Japan on April 18th, 2013 and was the best selling game in Japan on its release, selling 404,858 units. It was released in North America and Europe on June 6th, 2014, Australia on June 7th, 2014, and South Korea on July 17, 2014.

The game takes place on an island inhabited by various Miis, which the player can import from their 3DS, other devices, or QR Codes, or create from scratch using the 3DS' camera or the in-game creation tools. These Miis can be given their own voice, which is spoken in vocal synthesizer software, and a unique personality based on slider inputs given. Miis can then perform various actions, such as eating, trying on different outfits and doing many leisurely activities. As more Miis are introduced, many strange and curious interactions can occur between Miis, such as friendship, romance, rivalry, and even bizarre musical numbers. 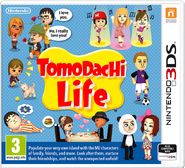 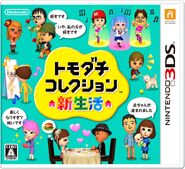 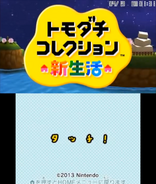 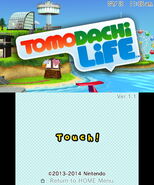 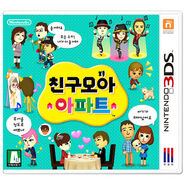 The bottom screen icon of Tomodachi Life on the 3DS OS. 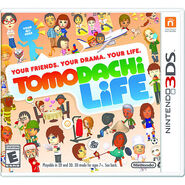 The game received positive reviews, with review sites such as IGN giving it a 8.4 and the game was praised by reviewers for it's quirkiness and fun nature, but criticized the tediousness of the game.

Retrieved from "https://tomodachi.fandom.com/wiki/Tomodachi_Life?oldid=24305"
Community content is available under CC-BY-SA unless otherwise noted.