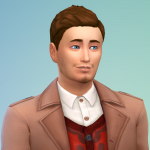 Hello, welcome to my userpage!

I'm Gameboy, but you can call me Michael (my Mii's name) if you like. Tomodachi Life's a good game to see your island grow and see how your Miis can live together.

Retrieved from "https://tomodachi.fandom.com/wiki/User:GameBoy2479?oldid=41888"
Community content is available under CC-BY-SA unless otherwise noted.