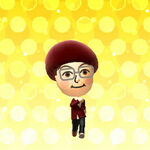 Meaning: Honeybunny) here! I am a regular Tomodachi Life fan who owns both the North American and Japanese (I also own Tomodachi Collection but who cares!?) versions of Tomodachi Life.

I am not planning to delete any Mii's because instead of deleting them, I just edit them of how I want or like.

I just love playing Tomodachi Life and playing games that have Mii's in it (excluding Wii Music).

Me Winning The Card Mini-Game In Tomodachi Life.

Guy’s Chat Session.
Add a photo to this gallery

Tomodachi Life Best Songs Ever 2 (Japanese Where Did Food come From)
Kirby and the Clauses singing.

Why I stopped playing Tomodachi Life
Me singing Enka.

Tomodachi Life Best Songs Ever 5 Finale (TRIGGERED Song Japanese)-1590777857
Toad and I singing.
Add a photo to this gallery

Retrieved from "https://tomodachi.fandom.com/wiki/User:Gamerknowitall?oldid=42715"
Community content is available under CC-BY-SA unless otherwise noted.