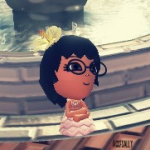 aka Kia (my internet name)

♡♡♡♡♡♡♡♡
I own both the North American and Japanese (My Japanese is not that good, but I'll try my best) versions of Tomodachi Life.

I'm not planning to make a chart of my islanders, because I usually delete miis when I get bored of them. However, some of the miis shown in the pictures have been on the islands since day one.

I love making Miis and playing games that have them in it (some, not all).

My Mii qr code site link below, a lot of them are original character Miis with some being actual characters from things.

Some miis in the pictures will be missing, because I didn't make them:

Things I don't understand or other things from this game.

Kia and Emi hanging out.

Kia and Yuuto (Her husband on Sunnydale) were together for like a year now.

Touya swinging a bat while Kiki and Takashi are standing nearby.

They hit the ball off of the roof.

Tod (yes, it's spelled with one 'D') and Nori hanging out, this picture is kinda old.

Sakura being lazy in space.

Ben trying to make a living.

Toko hula dancing in her room.

A visiting Traveler and one of the islanders were playing, until I interrupt it. (old picture)

Pretty busy day at the park on Sunnydale. 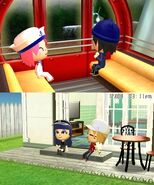 The only OTPs from anime that I actually like and have together on Tomodachi Life. 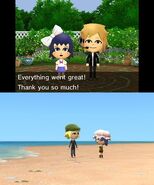 Himawari and Oliver, married for like three years now.

Many Miis hanging out at the Fountain.

Two of them are facing a different direction.

Kaylee with her mom and dad, Takeshi and Sadie.

Anthony and Sachiko (nickname 'Sachi'), the island's elder sweethearts (and married to each other).

Sakura got rejected recently, so I gave her a music box to cheer up.

Parenting at a whole new level: A mother watches her daughter eating at the Cafe.

So many at the Cafe.

A happy family taking a bath together.

Walt, his real name is Walter. He's a new resident on Sunnydale island.

Hisei visiting his mom and dad after just growing up.

Toko and Hisao hanging out.

If only this room my two Miis are standing in was in the North American version.

Beau can't get others to laugh at his jokes.

Two officers (not really) on a break.

Jackson, who's at my other island sent a letter to his parents.

Mr. Nasty and Douglas, two best friends on vacation together.

What's so interesting about the ceiling in this game.

Miki and Mr. W are so cute.

This would sound a lot weirder if she was a small child, which she isn't.

Now I see why they changed that to purple in the Western versions.

Wow...the boys version of that outfit looks like a diaper.

New islander, Jimi and her parents on vacation.

William (Nicknamed, Will) became an islander on January 23rd, 2020.

The couple who dated the longest, finally got married!
Add a photo to this gallery

Retrieved from "https://tomodachi.fandom.com/wiki/User:Marysue124?oldid=42570"
Community content is available under CC-BY-SA unless otherwise noted.